WWII touched every man, woman, and child in America. After the bombing at Pearl Harbor, the reality of how close the war might come to the continental United States became a reality. And Williamsport was up to the task. ​​​​​​​

Under the supervision of Editor Margaret Jenkins, General Manager George W. "Hooper" Wolfe, and Business Manager Adam Harsh, production of Volume 1, No. 1 of "The Dug - Out" tabloid newspaper was printed November 15th, 1942.

"Hooper" Wofle wrote that Williamsport's home-front newspaper was intended to "make you feel at home where you are",  and was mailed free "to every mother's son" in the armed forces whether they were at Camp Meade or India, with copies scattered all over the world from jungles to London. He credited "Nip" Traver, (toll collector), as the originator of the idea for the newsletter, and that the "General (and strictly unofficial) headquarters for the Dug-Out was  "Hooper Wolfe's Tackle shop where sportsmen can buy anything from a fishing license to a flat bottom boat."
He also claimed that "Ham" Fisher, creator of Joe Palooka, complimented the town by drawing a cartoon of Joe going into action with a copy of the Dug-Out tucked in his hip pocket (we are still looking for a copy of the cartoon).
Printed by the Stouffer Printing Company on North Avenue in Hagerstown, MD, locals paid 10 cents a copy. The six-page, Volume 1 #1, was an introductory edition with reports on local war committees, introductions, and some very corny jokes.
According to "Hooper", only news of local interest to the boys away was printed: Nip Travers reported that his Persian cat "Smokey" was brutally run-down by a hit-and-run driver, and there oughta be something done about it; Hooper Wolfe's grandchildren were having a high old time in their sand pile playing with a big "fishing worm" and Mrs. Wolfe almost passed out when she discovered the worm was a small black snake; the Potomac River reached a new all-time low as a result of the drought; "Boots" Poffenberger came home on a furlough and pitched five innings for the Williamsport Wildcats; Sam Eckis, proprietor of the bowling alleys, invites the boys to hurry home and try out the maples; and the time the Williamsport Minute Men had to retreat when a very ambitious skunk staked a "blitz."  (Morning Herald, 25 Nov 1943)
The twice-monthly editions of the Dug-Out are loaded with stories, photographs of local soldiers, businesses, families, and reports of local happenings, gossip, births and deaths.
WAHA is in the process of scanning all volumes of the Dug-Out into a searchable online database. Coming Soon.

According to George "Hooper" Wolfe "These Williamsport folks are not unlike any other Americans, except that when there's a job to be done they don't spend much time going into a huddle. They do it without frills and they hate details and regulations."
The last, and much more refined edition of The Dug-Out was printed October 22, 1945. The paper had the same loyal editor and staff, was 10 pages in length, and had a circulation of 2,000 copies. It still costs 10 cents.
The final words: "To the citizens of Williamsport and vicinity: Thanks a million for your support of the Dug-Out!!! Without your help its publication would not have been possible - Staff
Williamsport's next most important contribution to the war effort was the Ground Observer Corps, a World War II Civil Defense program of the United States Army Air Forces to protect United States territory against air attack. The 1.5 million civilian observers at 14,000 coastal observation posts performed naked eye and binocular searches to detect German or Japanese aircraft. Observations were telephoned to filter centers, which in turn forwarded authenticated reports to the Aircraft Warning Service, which also received reports from Army radar stations. Thousands of observation posts were established on the east coast from the top of Maine to the tip of Florida, and roughly inland as far as the western slopes of the Appalachian Mountains. It became inactive on May 29, 1944.
The first issue of The Dug-Out reported that under the supervision of Raymond H. Miller and Edith Bowser Harsh, Williamsport had the most efficient Aircraft Spotter's Station in the State, manned 24 hours a day since December 7th .

The Williamsport Aircraft Spotter's in front of the small shed erected at the Potomac River Bridge at Williamsport.

On it's initial setup, Williamsport's observation post 42-C "Issac Eight Zero" was located at the water works,  but soon moved to a small building erected at the Potomac River Bridge.
Over 150 locals volunteered for service. Women, aided by high school students, manned the station from 8 am until 6, the evening shift was covered by the men
Three log books from the Williamsport Post are on display at the Town Museum. They were discovered in a storage room at G. A. Miller Lumber Company where they had been collecting dust for over 60 years.
Spotters were required to Friday evening meetings in the Williamsport High School auditorium where they were briefed by H. M. Garrison of Hagerstown, chief deputy air warden for Washington County, and other speakers.  Movies such as "Eyes of the Navy," "American Sea Power," and "Pearl Harbor," were played to keep spotters informed and inspired.
This page from July of 1943 was the last entry in the logs "Post Inspected - closed and locked."

The volunteer job of scanning the skies with binoculars from a cramped, cold building was not an easy task. Volunteers were required to familiarize themselves with the aircraft pictured in the US army manual "Identification of Aircraft." This rare 1942 Army Air Forces identification guide gave observers a crash-course in US Army and Navy bombers and fighters, in addition to British, Japanese, and German aircraft showing the fuselage, nose, tail and engine position of each aircraft.
below: pages from the 1942 Identification of Aircraft issued to observation post watchers 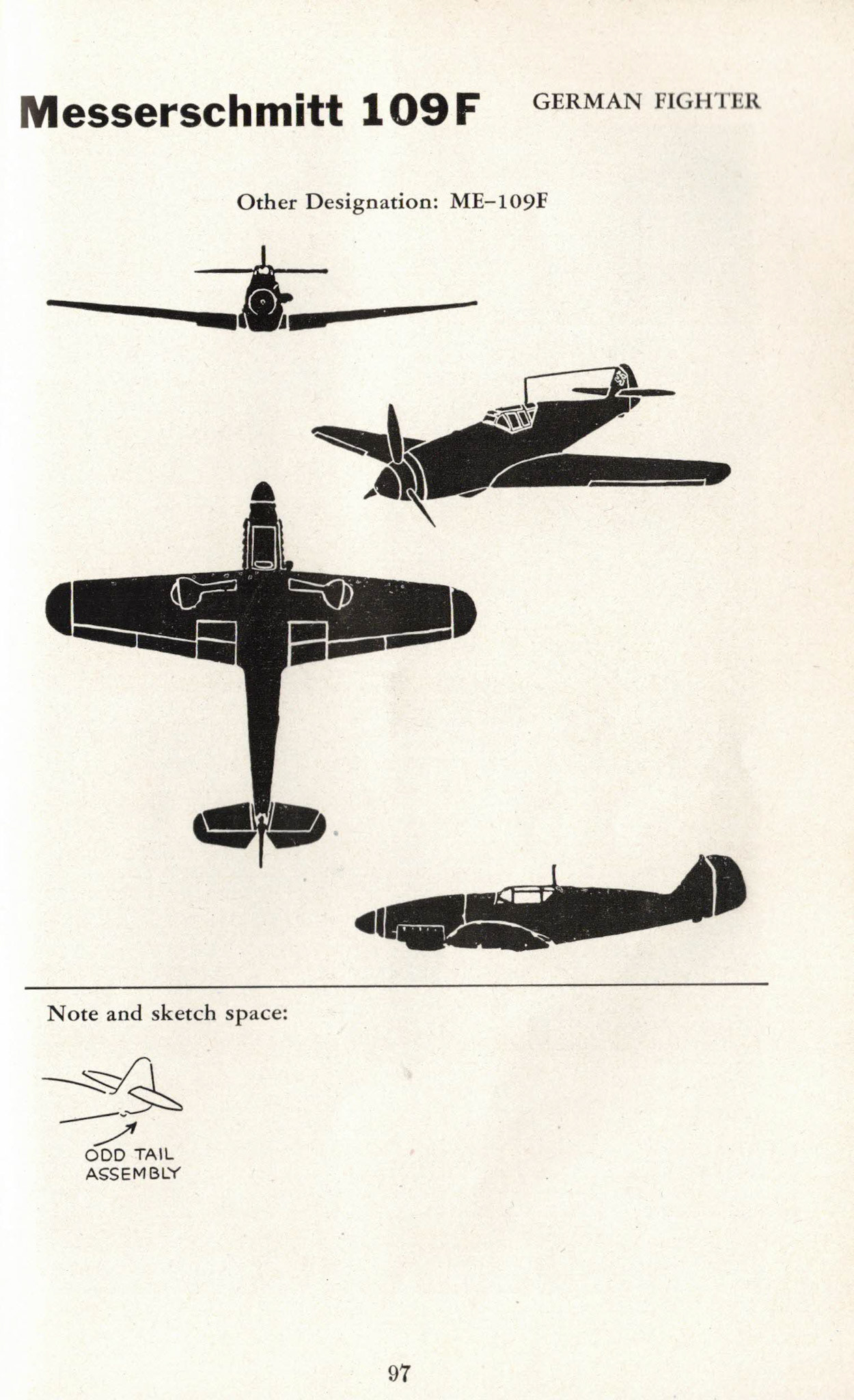 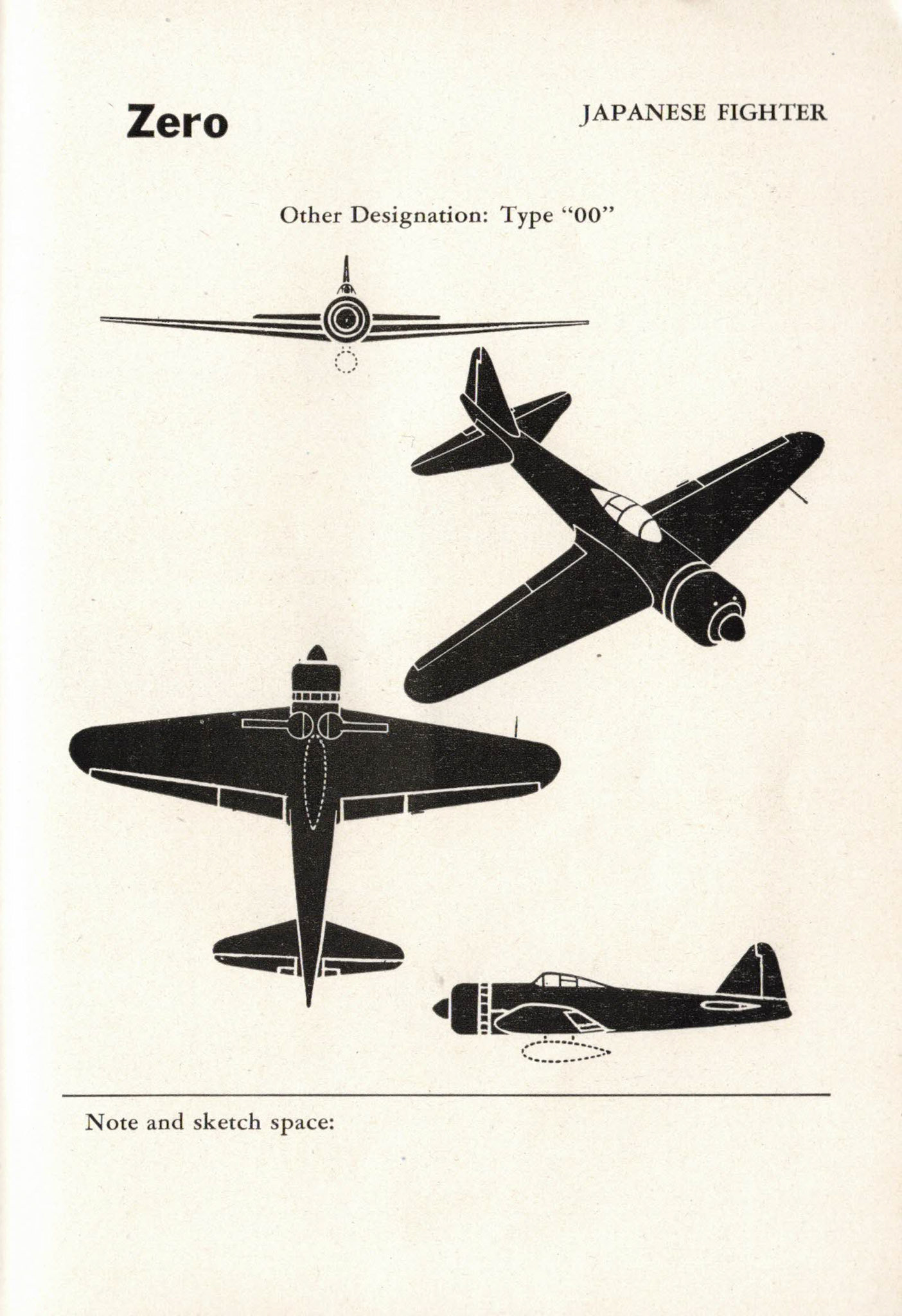 Ever vigilant, Williamsport organized a "Maryland Minute Men Company of Reserve militia," under the command of Captain David K. Cushwa and Sargent Souders. The Dug-Out reported that "under the instruction of ex-army officers it has developed into a real outfit. Uniformed and equipped with high-powered rifles and other arms the company has been training in maneuvers in cover, skirmishing and posting of inside guards."

If the enemy attacked  Williamsport, the town was ready. After the 1941 death of Congressman William D. Byron in an airplane crash, his 20-room mansion along Potomac Street in Williamsport was purchased by Dr. Paul Nelson Fleming.  In January of 1943, Dr. Fleming converted most of the home into a private hospital. Deemed an official "Casualty Station" under the direction of doctors Ira. M. Zimmerman and Ralph F. Young, they prepared to treat the wounded. Considered one of the best equipped in the state, this station had a reception room, an operating room, and a dressing room with running water, emergency lighting, and full kits of instruments and supplies for emergency work. Ambulance crews were trained and equipped to move the wounded to the station.

The Red Cross, Red Cross United Service Organization, and First Aid Corp of Williamsport were ready and able to treat the wounded.

For gallantry, William Sherman "Jack" Mellott received the Oak Leaf Cluster Bronze Star from General Maurice Rose.
Less than a month later, General Rose commanding the 3rd Armored Division, was killed in action in Germany in the closing days of the war.
Jack returned to Williamsport and served as Williamsport's Postmaster from ____ to ____.

Eugene "Turkeybird" Anderson of Williamsport, died from wounds after invasion of Siciliy, Italy.

In 1931, Richard Doub (1908-1985) began teaching history and athletics at Williamsport High School. In April of 1942 he became the first school teacher in Washington County to enlist in the army.
Ever the gentleman, he reported to the Hagerstown Newspaper that he had "nothing by kind words" for his fellow private Clark Gable. After graduating from officers candidates school, he was commissioned a 2nd lieutenant in the US Army Air Corp.
After his discharge in 1946, he returned to Williamsport High School where he taught until 1977.

Ivan Junior "Jack" Holland (1923-2019) of Williamsport, Staff Sergeant with the United States Army Air Force, serving as a Tail Gunner on a B-17 in World War II. He flew 34 missions in the European Theater.

PFC Harry F Bowman of Williamsport leaped unarmed into a foxhole and disarmed a German soldier preparing to shot at his comrades. For his gallantry he received the Silver Star.

On October 29, 1945 the Williamsport Lions Club celebrated Veteran's Day with a parade and a veteran's banquet at the Community Building.

The banquet was free to all veteran's of World War II in the Williamsport district. 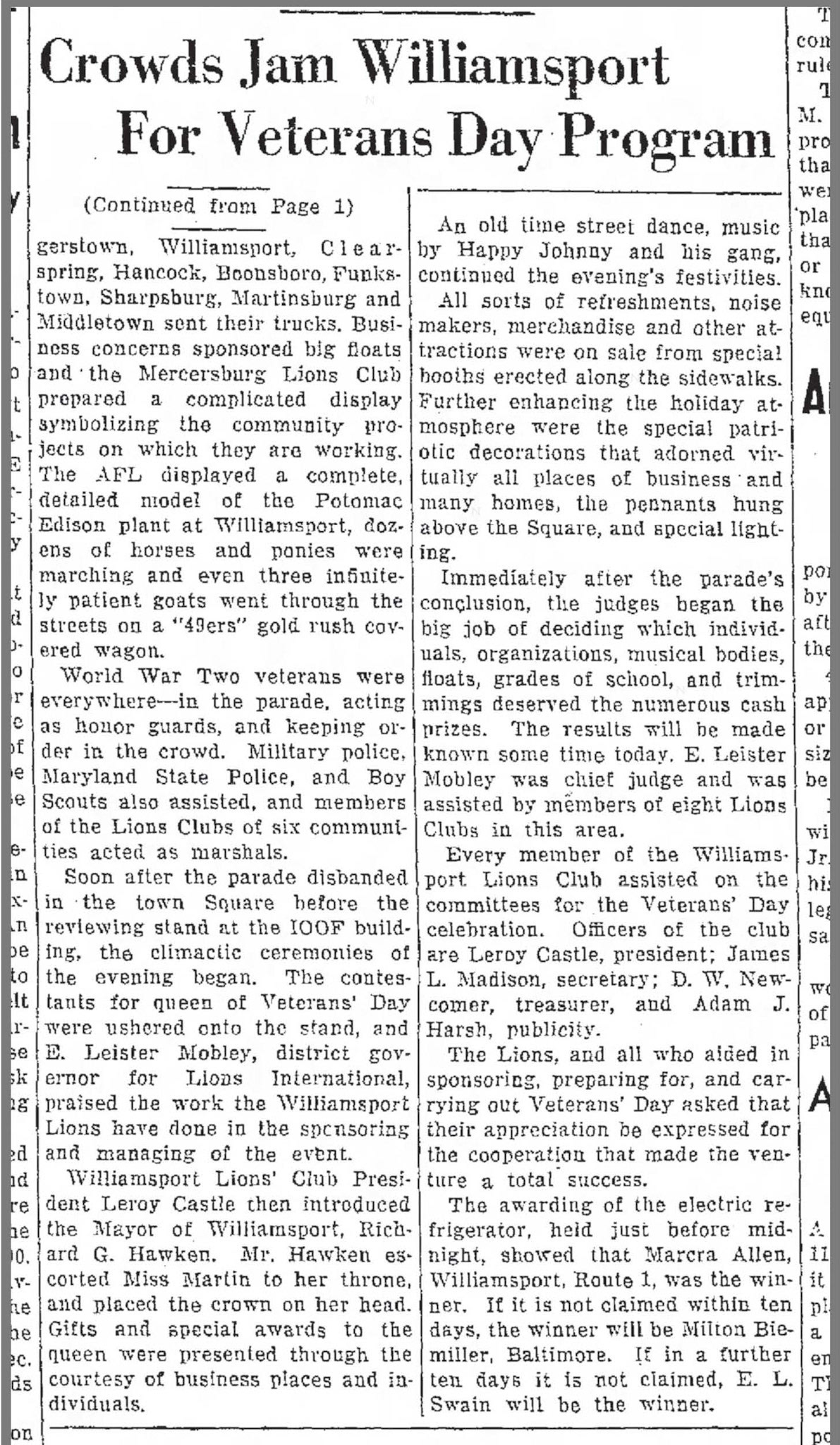 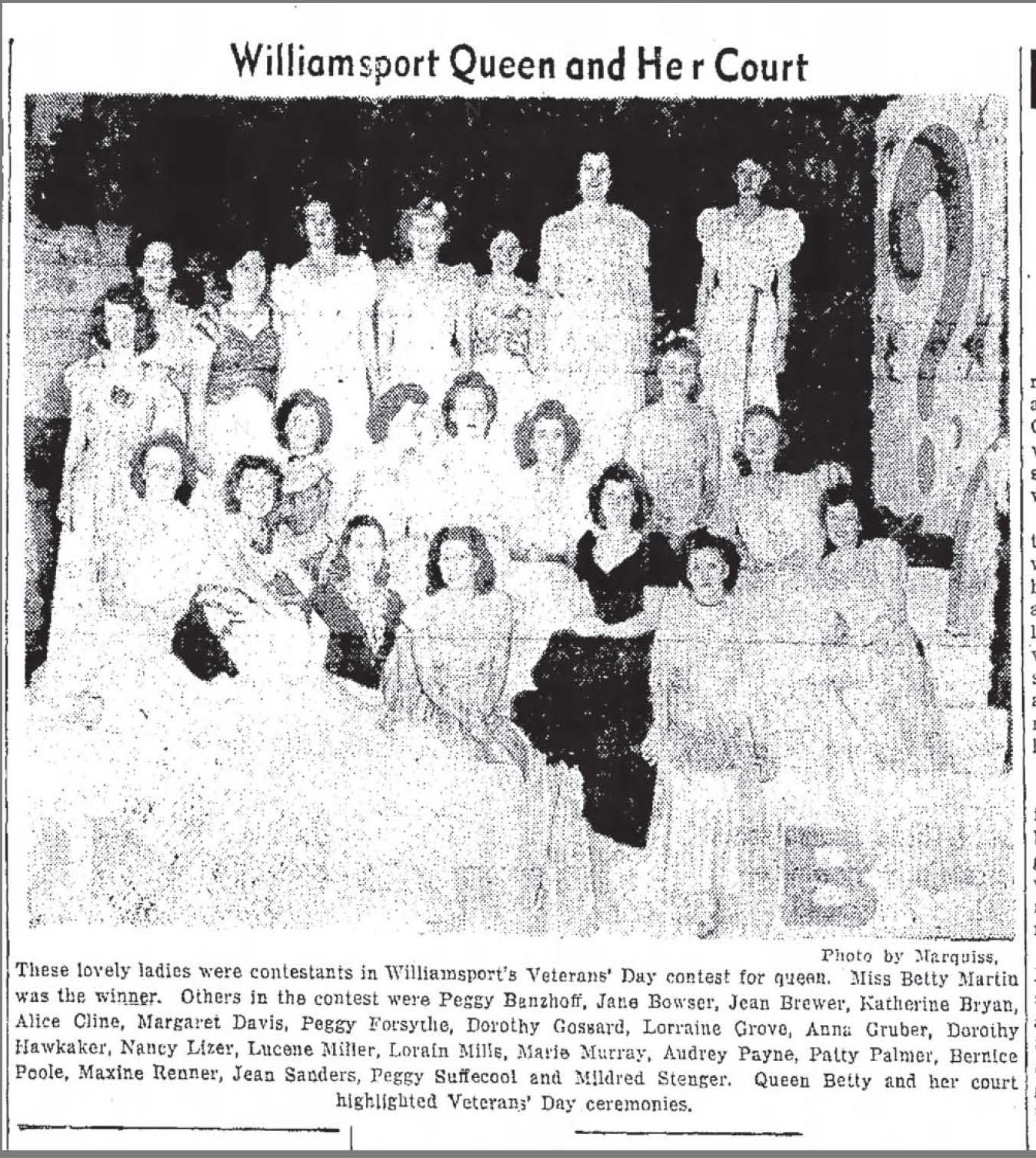 The Liberty Ship SS William D. Byron was built in January of 1944 at the Bethlehem-Fairfield Shipyards in Baltimore, MD and launched February 2,  1944.  In September, 1944 she hit mines and capsized off the Italian coast, was towed into Savona, and declared "CTL" Constructive Total Loss. The ship remained at Savona until it was scrapped in 1948. 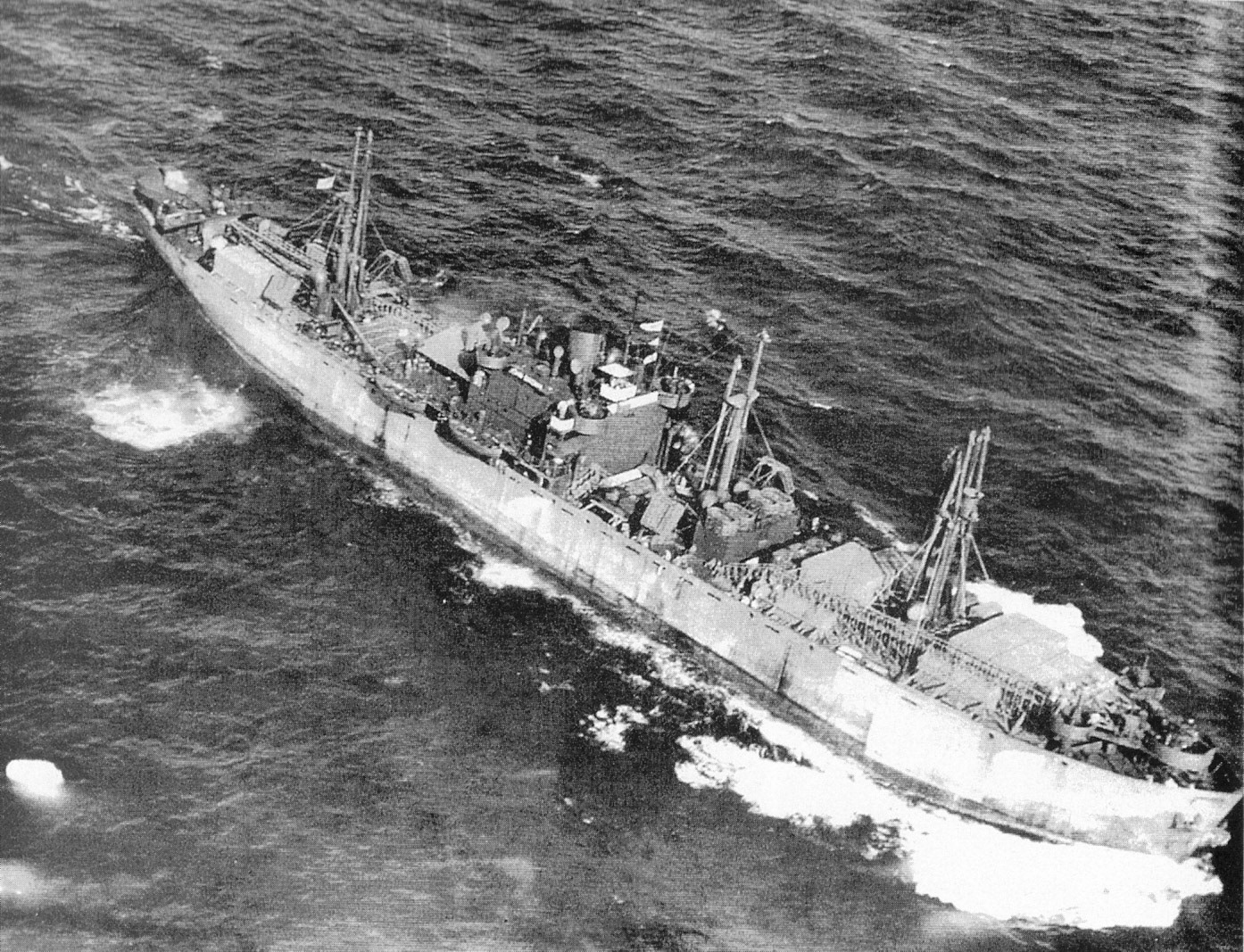 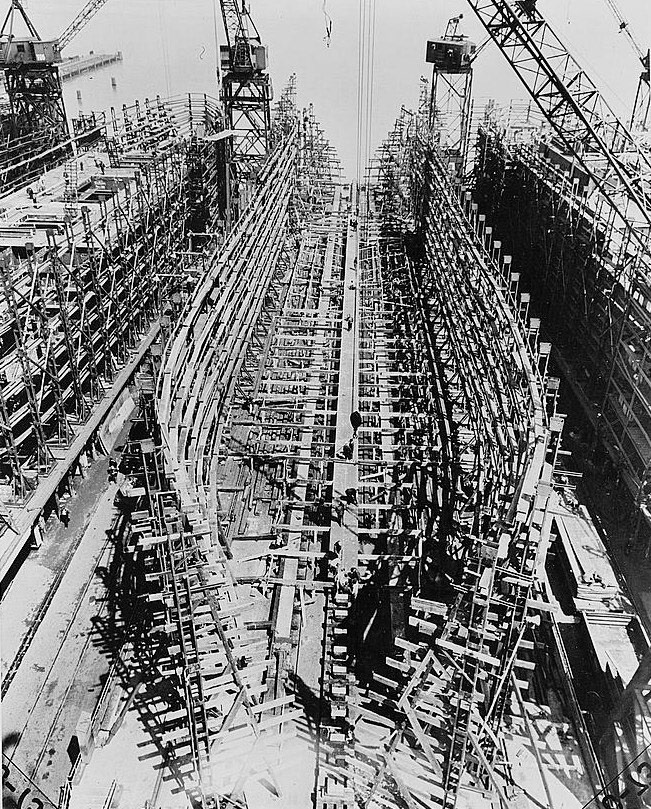 Days 2 Laying of the keel plates 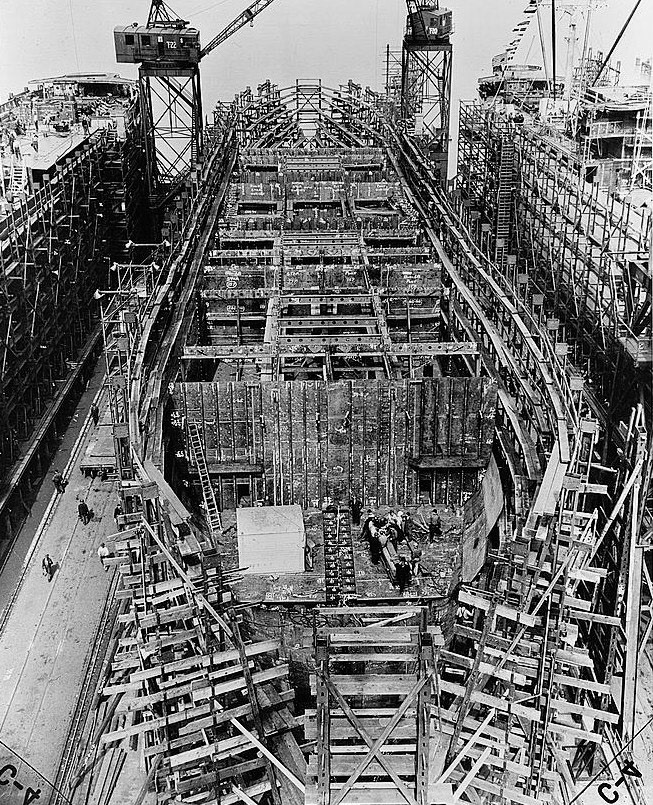 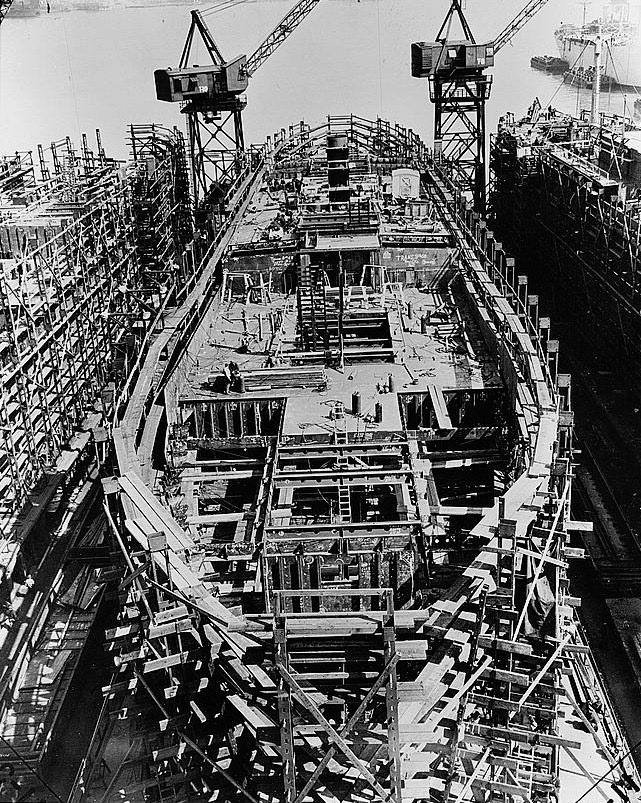 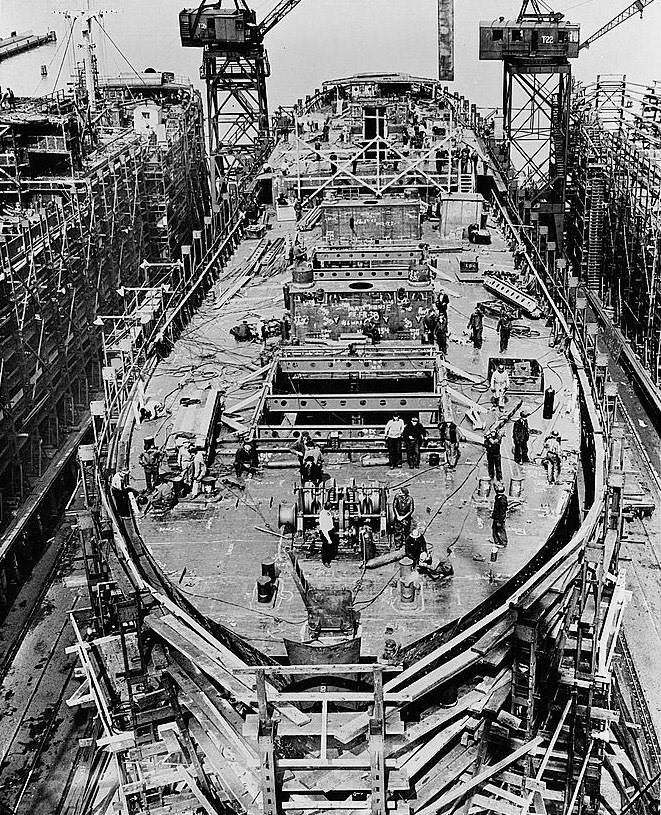 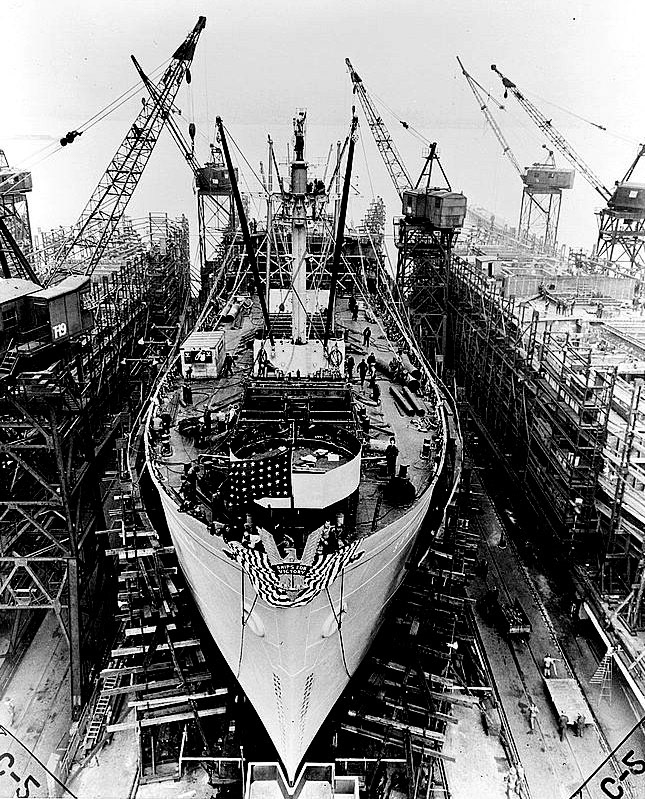 After the sinking of the SS Wm D. Byron, Hagerstown was inspired to fund a war ship.  The "Hagerstown Victory" was one of the new 10,500-ton class ships known as Victory ships, designed to replace the earlier Liberty ships. Victory ships were designed to last longer and serve the U.S. Navy after the war. The Victory ship differed from a Liberty ship in that they were faster, longer, wider, taller, had a thinner stack set farther toward the superstructure and had a long raised forecastle. SS Hagerstown Victory was a Victory ship-based troop transport built for the U.S. Army Transportation Corps (USAT) late in World War II under the Emergency Shipbuilding program. It saw service in the European Theater of Operations during 1945 and in the immediate post-war period repatriating U.S. troops. Hagerstown Victory was one of 97 cargo Victory ships converted to a troopship. 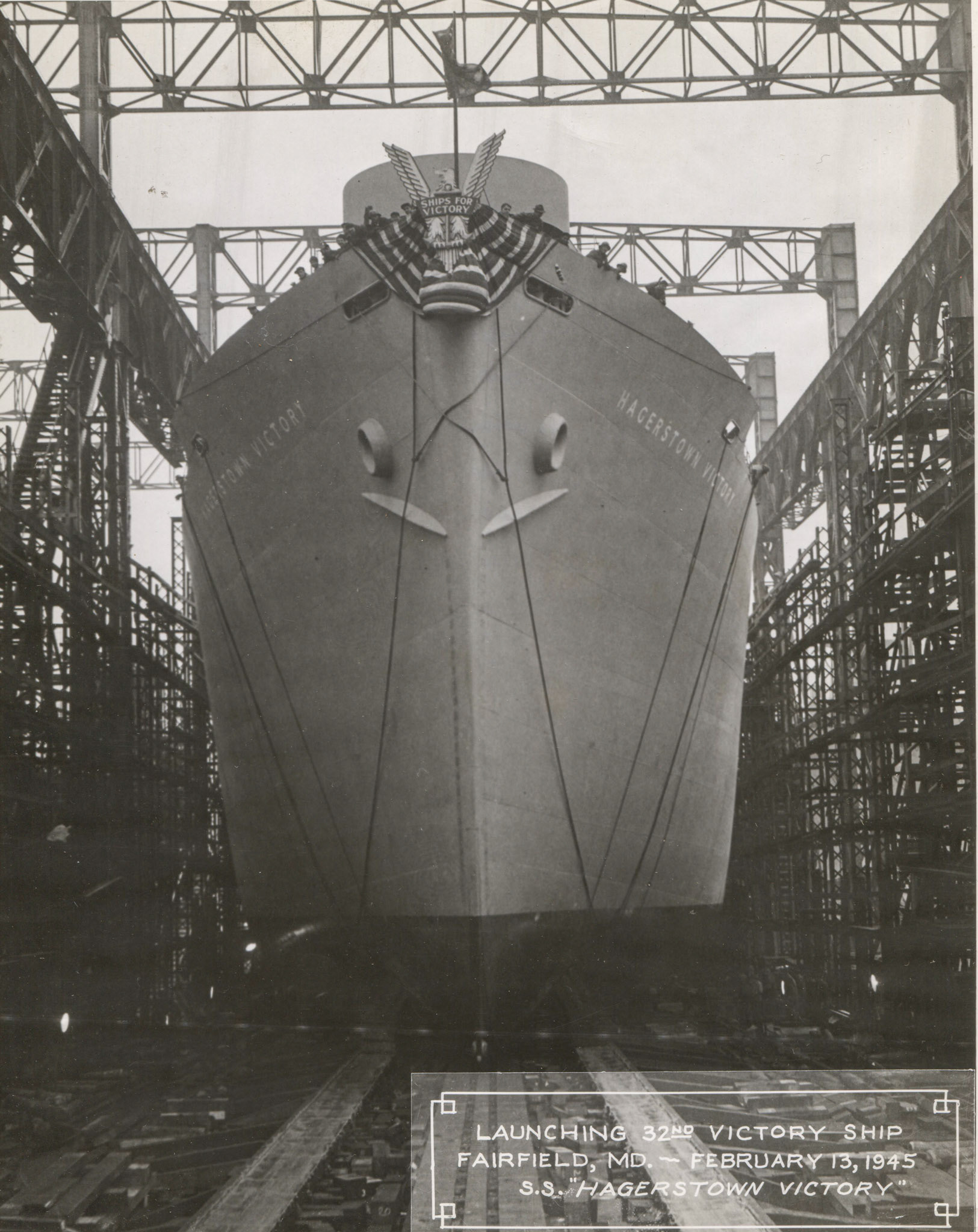 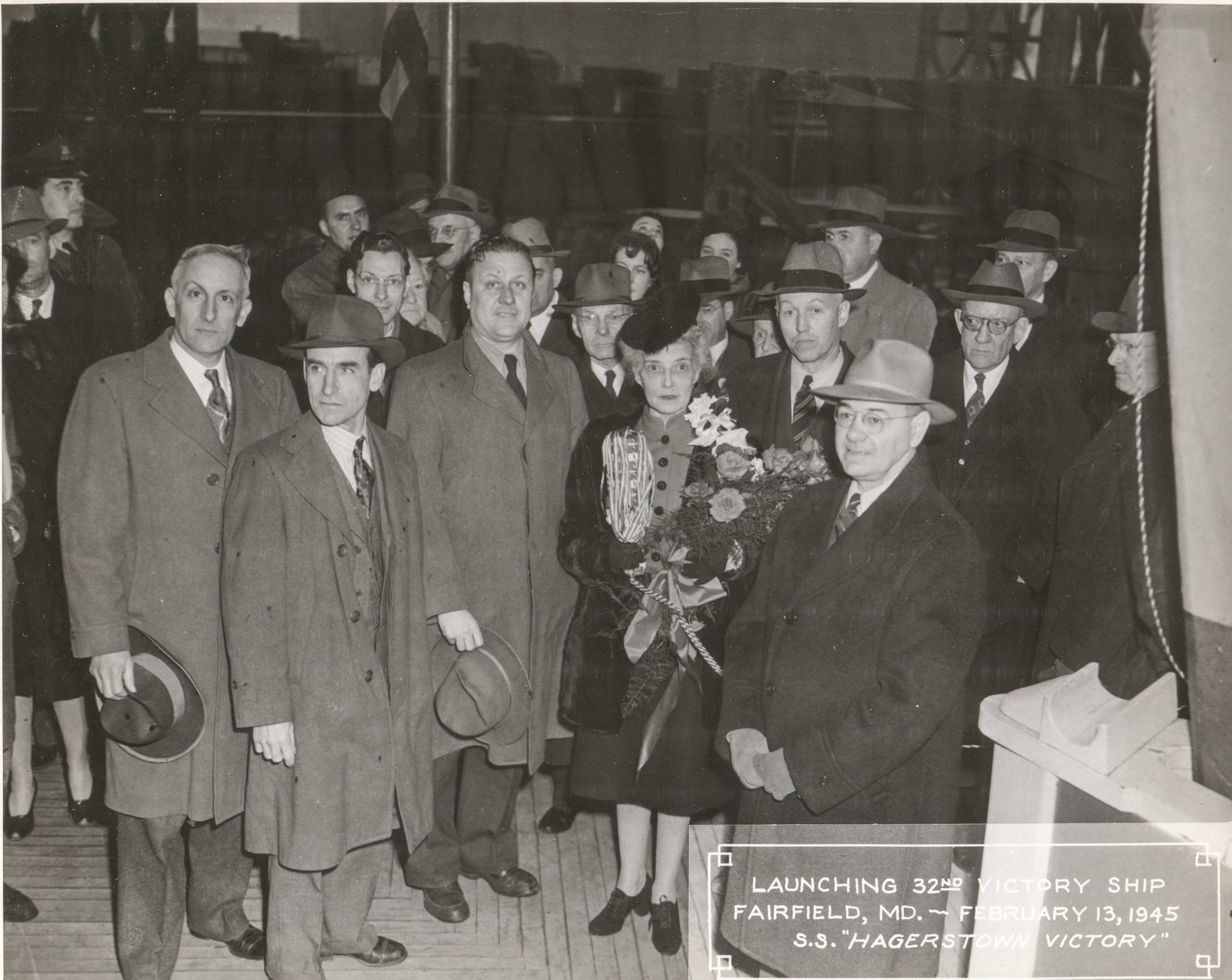 Later in 1946, Hagerstown Victory was laid up in the reserve fleet at the James River in Virginia, as part of the National Defense Reserve Fleet. In early 1967, she was put back in service and operated by the Oceanic Ore Carriers of New York to supply troops for the Vietnam War. In late 1967, she was sold to Chatham Shipping Corporation of Wilmington, Delaware, and renamed SS Chatham. In 1969, she was sold to the Resolute Marine Associates Ltd. of Wilmington. She was seized by U.S. Marshals and sold on 23 May 1969, to Windjammer Shipping Inc. of Wilmington. She was then renamed Windjammer Janeen.
In 1970, she was sold to Trans World Shipping Ltd. of Panama and renamed SS Julep. On 23 November 1970, she sank in Typhoon Patsy off the coast of Luzon, while steaming from Taiwan-Formosa to the Philippines. An SOS distress call brought three ships which were able to save 22 of the crew, but 9 crewmen were not found.

Original photos in the Town Museum Collection of General Macarthur in Japan August 1945 taken by a local serviceman. 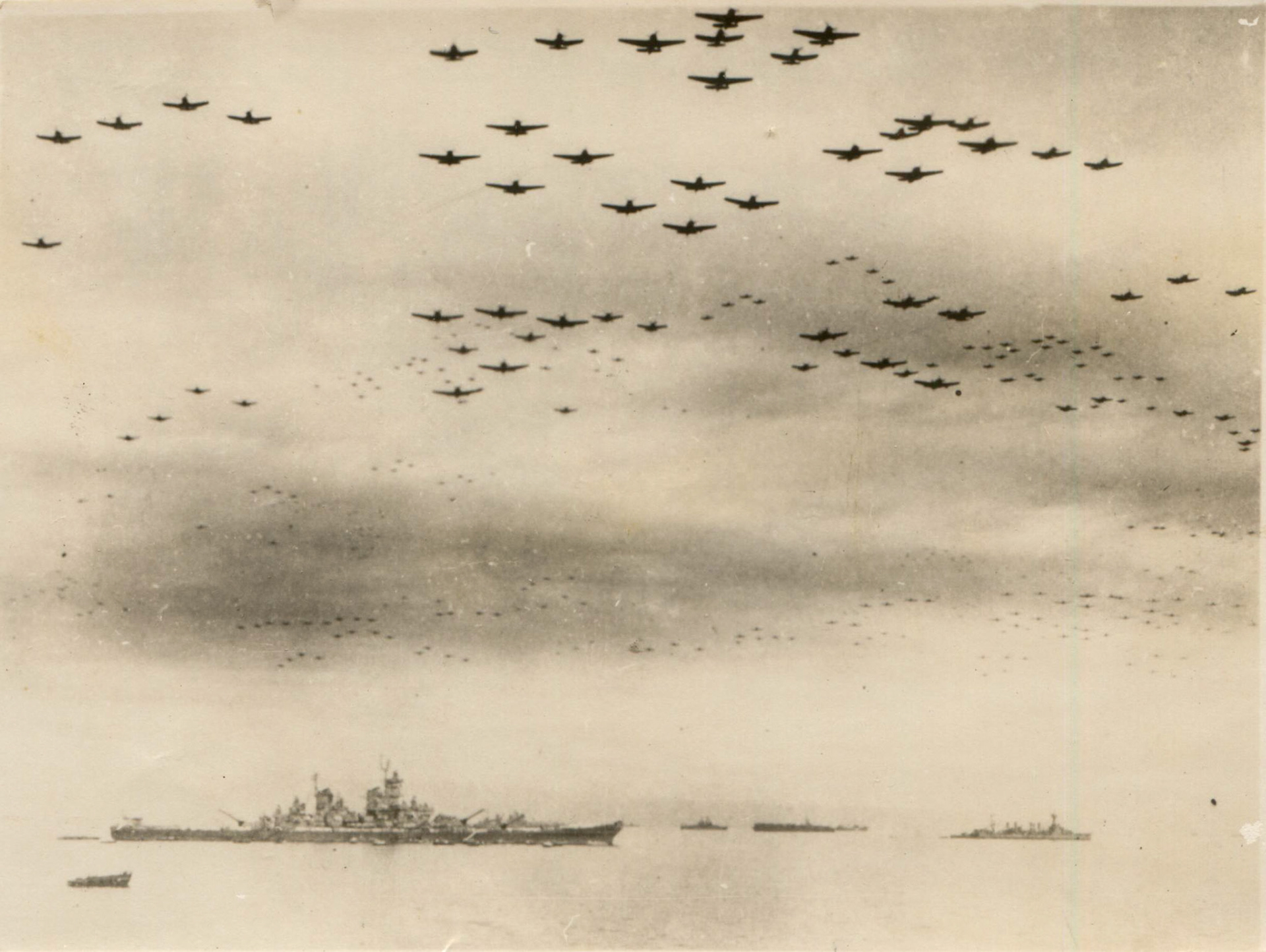 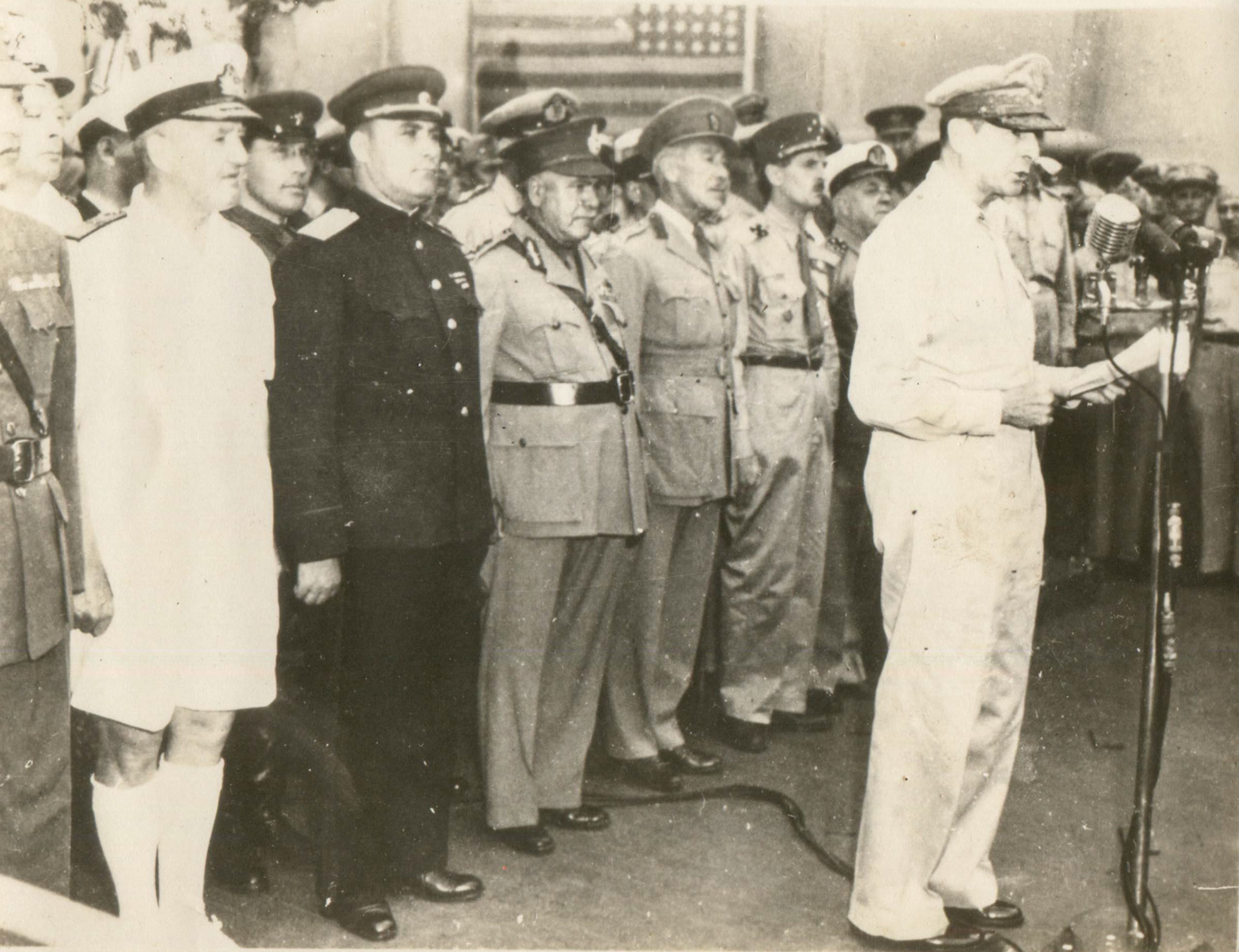 Williamsport Swimming Pool
↑Back to Top